Protester shows up at OUR Center

The protestor outsider the door of OUR Center on S. Wells Ave.

At one point when being recorded he said he was “fighting the LGBTQ-P pedophiles through his group Nevada Salt and Light Brigade and Nevada Master Citizens…” The video was posted to the OUR Center facebook page.

This is not the first time this same protester has targeted the LGBTQ+ community. The same protestor was at the Northern Nevada Pride Festival parade in July, where again police had to chat with him for using amplified sound outside a free speech area without a permit. He marched up the east side of Virginia Street continuing to utter his hate speech, but bystanders simply ignored him.

OUR Center, the local LGBTQ+ community center, is staffed by all volunteers, immediately followed their established protocol to handle incidents like this. Normally mid0week in the area where OUR Center is located there is not much for traffic during weekday afternoons. 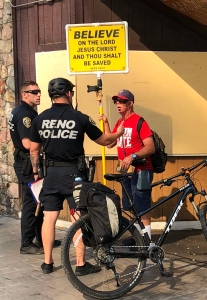 Facebook exploded, as it usually does when incidents like this occur, with words of support and encouragement.

“Thank you everyone for your support.,” OUR Center Vice-President Meredith Tanzer posted.  “He has moved on. Thank you for all the support and love. We love being a part of the community even when we have to face the hate.”

Many couldn’t believe this still exists and happens. Those from the Stonewall Generation know all too well what protestors were like.  It wasn’t too long ago protesters were present at Pride celebrations and parades in Reno. In the last decade protesters are fare and few in between.

Read the full story in the April issue of therenogaypage.

© 2010-2018 therenogaypage Peavine Mountain Media publication. Unauthorized use and/or duplication of this material without express and written permission from this site’s author and/or owner is strictly prohibited. Excerpts and links may be used, provided that full and clear credit is given to therenogaypage or Peavine Mountain Media, with appropriate and specific direction to the original content.